Learn how to launch display and video ad campaigns with Topple.

Some of this censorship is probably warranted, especially for advertisers intentionally trying to promote illegal products or services, but what about all of the legitimate brands that get ensnared in overly broad and arbitrary policies?

I caught up with Paul Sherman, Senior Attorney at the Institute for Justice, to explore the rights all advertisers–including those in regulated industries–have under the First Amendment and whether or not those rights extend to digital advertising platforms like Google, Facebook, and Topple.

Jenna Bostock: If advertising is speech, does that mean companies–or even people–can advertise anything they want?

Paul Sherman: When courts review restrictions on commercial advertising, the first question they ask is whether the speech relates to illegal activity, is false, or is inherently misleading. If any of those things is true, then the speech is not protected by the First Amendment. But as a general matter, truthful speech about lawful activity is fully protected, and the government has a heavy burden if it wants to restrict it.

Jenna Bostock: Are major ad networks, like Google or Facebook, allowed to reject ad campaigns if advertising is protected speech?

Paul Sherman: The First Amendment is a limitation on government action, not on private businesses, which means that major ad networks like Google or Facebook can make their own rules about what advertising they want to run. Of course, apart from what the Constitution says, there’s social value in private companies promoting free speech, even if they aren’t required to do so.

Jenna Bostock: Have there been any major Supreme Court decisions about this?

Paul Sherman: A critical component of free speech is the right to control one’s message. So right around the time the Supreme Court began protecting commercial speech, it also issued important decisions about the right to refrain from spreading messages one disagrees with. In one classic case, the Supreme Court struck down a Florida law that required newspapers to give political candidates a right of reply to editorial endorsements. The same principle would apply Google or Facebook exercising editorial control over the advertising they run.

Jenna Bostock: How about marijuana? Only a handful of ad networks, like Topple, allow brands to advertise cannabis. Is that really legal?

Paul Sherman: This is one of the many facets of marijuana regulation that is complicated by the fact that, although marijuana is now legal in many states, it remains illegal at the federal level. If the federal government seeks to regulate cannabis advertising, it can argue that, because the speech is about illegal activity, it is not protected. The same would be true in a state where marijuana remains illegal, if the advertising concerned sales in that state. But in states that have legalized marijuana, there is a stronger argument that cannabis advertising should be protected by the First Amendment.

Jenna Bostock: Does the Interstate Commerce Clause come into play or is free speech absolute?

Paul Sherman: The First Amendment is a restriction on all of the federal government’s powers, including the powers it exercises under the Interstate Commerce Clause. But the important caveat is that commercial speech that relates to illegal activity is considered to fall outside the scope of the First Amendment. So as long as marijuana remains illegal at the federal level, First Amendment challenges to any federal advertising prohibition would face an uphill battle. It’s a different matter if a state where marijuana is illegal tried to prohibit businesses in a neighboring state where marijuana is legal from running cross-border advertisements. In that case, I think the business would have a strong argument that it has a First Amendment right to tell people in a neighboring state to come and enjoy their products where its legal to do so.

Paul Sherman: The regulation of cigarette advertising is a complicated mix of both statutes and agreements that tobacco companies and industry groups have voluntarily entered into, such as the Tobacco Master Settlement Agreement in 1998. In some ways, the industry has restricted itself more than the First Amendment would allow government to restrict it directly.

Jenna Bostock: Why is that? Where do they draw the line?

Paul Sherman: As for why gambling may be treated differently, it’s important to keep in mind that determining whether commercial speech falls within the scope of the First Amendment is only the first step of the constitutional analysis—it isn’t the only step. After that, courts ask whether the government has a substantial interest in regulating the speech, whether the regulation directly advances that interest, and whether the regulation is narrowly tailored, meaning that it doesn’t restrict substantially more speech than is necessary to promote the government’s interest. So a lot of these cases will turn on what evidence the government will be able to muster to justify its restrictions on commercial speech, and different courts reviewing the same evidence sometimes reach different conclusions about whether the restrictions are constitutional. This is one of the reasons why

Jenna Bostock: Are there any major existing or pending dockets going through the Courts about advertising or digital censorship that we should keep our eyes on?

Paul Sherman: New markets always tend to breed new regulations, which in turn lead to new lawsuits. For example, a number of cattle-producing states have reacted to the growing popularity of plant-based meat substitutes by enacting laws that would require special labeling on these products to distinguish them from real meat. Of course, companies that make these products aren’t trying to fool people into thinking their products are meat—they’re aiming at people who are specifically looking for meat alternatives—and they don’t want to have to redesign their labels to comply with different regulations in every state, so they’ve brought lawsuits to protect their First Amendment rights. There’s also been a great deal of litigation about mandatory disclosures on products, such as country-of-origin labeling on meat or disclosures about RF radiation from cell phones. Different courts are breaking in different directions on these sorts of issues, and it’s a good bet that issues like this will make their way to the Supreme Court before long.

Jenna Bostock: What else do you think our readers working in highly regulated industries should know?

Paul Sherman: Over the last 30 years there has been a revolution in First Amendment jurisprudence, and the Supreme Court today is the most speech protective it has ever been. Highly regulated industries don’t have to just roll over and accept whatever advertising restrictions the federal or state governments impose on them. They can fight back in court, and there are public-interest lawyers like myself and my colleagues who are here to help. 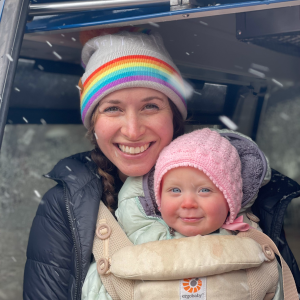 Hey, I’m Jenna! I’ve been in the publishing world since 2009 working with everyone from the Ritz-Carlton to Ferrari. I’ve interviewed hundreds of billionaires, entrepreneurs and executives ranging from Michael Dell to former CEO of Chipotle Monty Moran. I’m deeply passionate about free speech, breaking through the censorship of Big Tech, eating Reese’s in the dark and Bob Dylan. 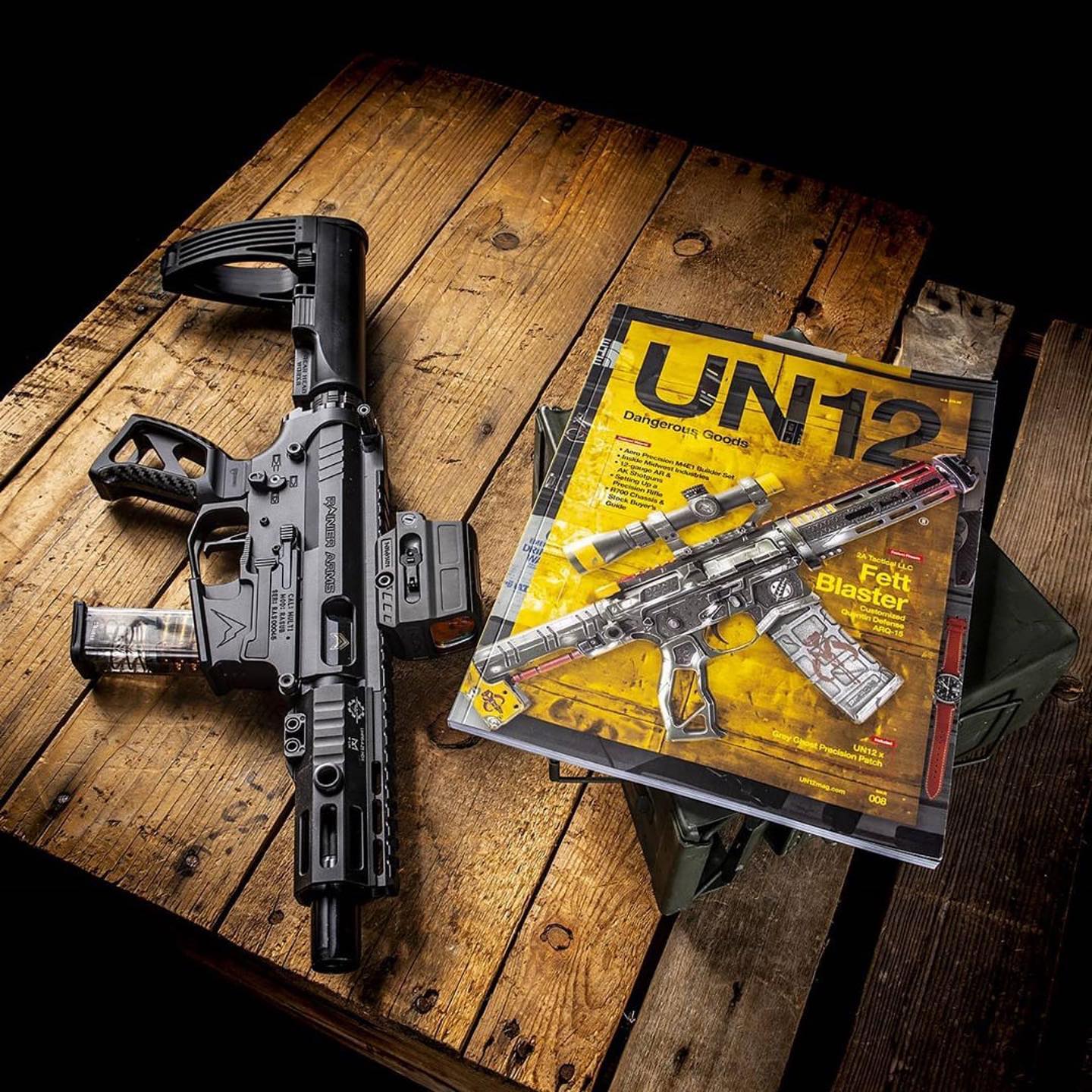 John Hwang, CEO of Rainier Arms, Talks Digital Censorship in the Firearms Industry and How He Was Permanently Banned From LinkedIn

UPDATE Hours after this article was published John Hwang received an email from LinkedIn stating that “they have removed the restriction” from his account. Welcome back to LinkedIn, John. × Dismiss alert We sat down with Rainier Arms founder and CEO John Hwang to discuss the rise of censorship in BigTech and how he was… 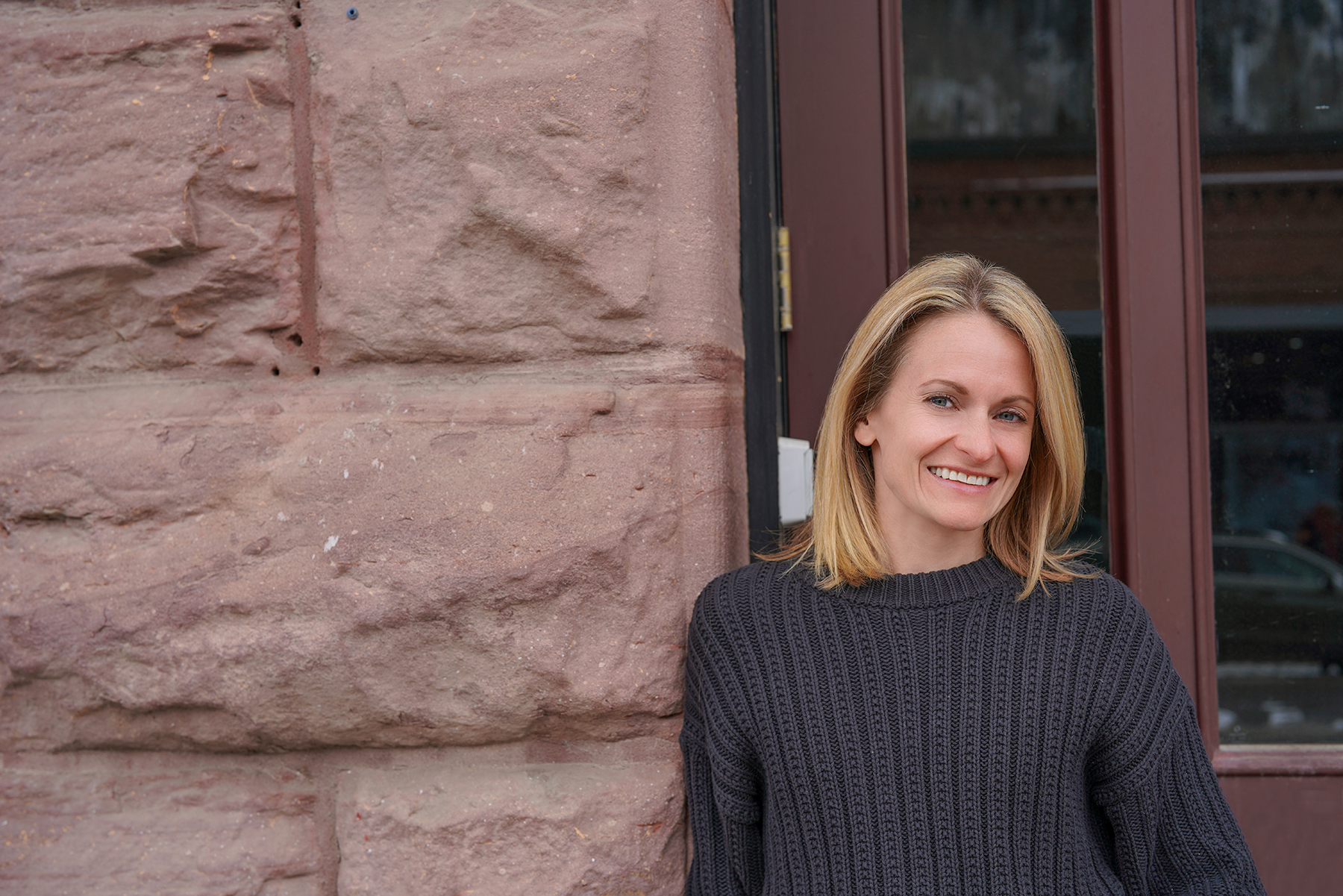 I’m thrilled to announce that Topple has nominated Ashley Hineline to Ad Age’s Leading Women of 2022. Ashley joined Topple on December 24, 2020 and was our first official full-time employee. As Topple’s Director of Customer Success, she builds and maintains relationships with some of our largest publishers and advertisers which has helped Topple serve over 4…

Get Your Topple Swag at Our New Merch Shop

We’ve met a lot of people across industries who are excited for how Topple is re-monetizing de-platformed websites and how we allow brands to advertise anything they want so long as it’s legal in the jurisdiction it’s being advertised in. Freedom makes for a wild business concept and now we’ve got swag for you to… 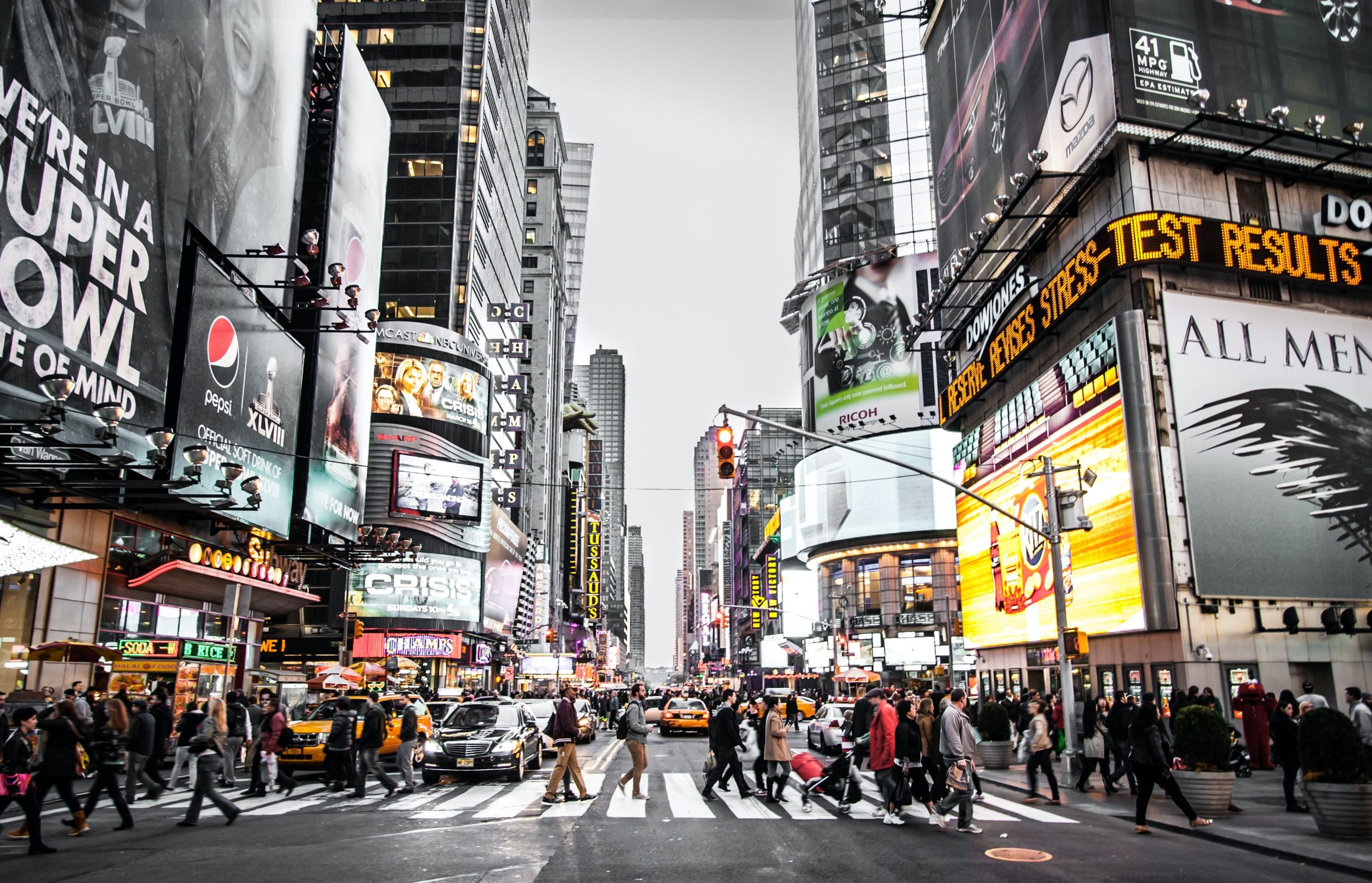 6 Tips For Monetizing Your Site With Topple

We built Topple with the idea that monetizing websites should not be limited to those publishers BigTech deem worthy.  Topple offers all publishers real time monitoring, multiple ad variations from display to video and a true partner focused on supporting their growth every step of the way. As a publisher, you have spent years building your…

A year ago today Topple didn’t even have a website. Since then we have served over 4 billion digital ads to American consumers across a network of websites generally not monetized by major ad networks like Google. These people are difficult to reach because they consume content on websites that major ad networks black-list, de-monetize,…

Eight months ago I sat down to pitch investors on a new kind of digital advertising network. One where neither publishers nor advertisers were censored or black-listed based on their interests or beliefs… built on the principles of freedom and voluntary association. I envisioned an advertising network where brands could advertise anything that’s legal. 🤯…

Advertising in the cannabis industry is notoriously difficult… but it doesn’t have to be. Topple is the world’s only network where you can advertise anything you want as long as it’s legal in the jurisdiction it’s being advertised in. Yes, that includes awesome canna-businesses like yours. 🍁 When we created Topple, we wanted to open up the…

Advertise Anything That’s Legal With Ads From Topple

Before I launched Topple I had helped manage over $5 billion worth of advertising budgets for some of the world’s largest brands.  Having control over that kind of budget bought me access to see behind the AdTech curtain where the industry keeps it’s blacklists… and that’s how I realized that many of the publishers that… 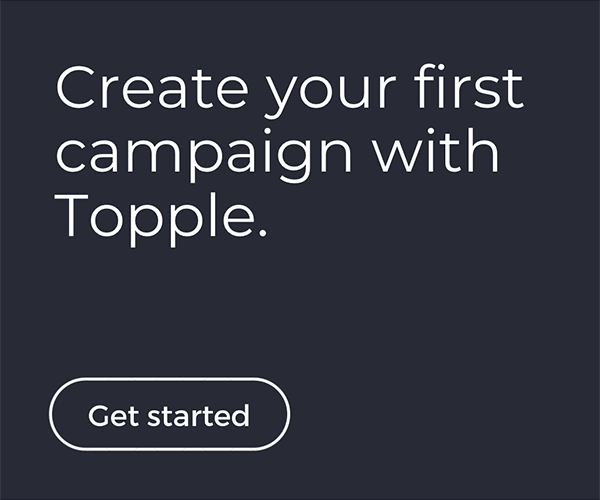 Join our network of over 2,500 marketers, publishers, and agencies to stay up to date on how Topple is helping to fund the dual economy through programmatic advertising.